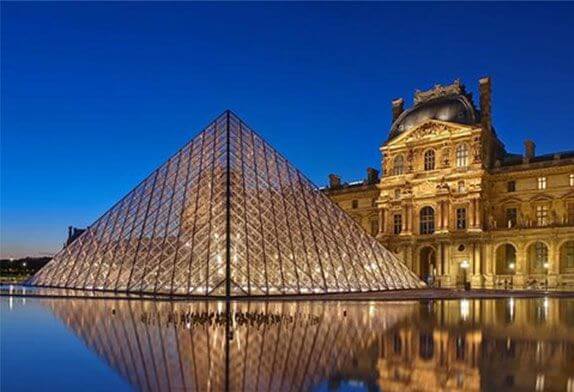 Although it is already 30 years old, the Louvre Pyramid is a perfect artwork that travels through time and space, both in design and in its structure.
The bottom of the main pyramid is square with a size of 35.4m*35.4m and a height of 21.6m, which is a four-corner cone. Its side is composed of 673 pieces of glass. The main pyramid is 200 tons, the net weight of the glass is 105 tons, and the metal frame is 95 tons. It is a steel pyramid with a cable structure.

Due to the common grid and truss structure, the bars are relatively thick. The structural designer of the main pyramid chose the cable truss, and the force rods were all cable-drawn. The upper chord is pressed, and must be made into a rigid rod and used as a frame for the glass. Both the web and the lower chord of the structural thickness direction adopts a cable. In order to ensure that the web has a tensile force, a cross web is adopted. Furthermore, to ensure the stability of the diamond mesh, the designer connects a loop cable in the middle of the vertical web.
The inverted pyramid has a plane size of 13.3m x 13.3m, a sag of 7.5m, and a spire of 1.4m from the ground. The inverted pyramid is an inverted tetrahedron consisting of two independent structures.

The superstructure mainly bears the weight of the glass and the wind load, while the lower structure needs to be balanced under the weight of the glass. The two share a ring beam and are independent of each other. The two-part structure is anchored to the steel ring beam of the circumference, and the steel ring beam rests on the concrete floor. Steel ring beam and circumferential ring steel ring beams are placed on the concrete floor through 8 supports. Among the eight supports, there is one fixed support, one one-way sliding support, and the other six are two-way sliding bearings.
For the best results, the inverted pyramid has many subtle designs. A drying system is provided inside to control the humidity and prevent condensation on the glass surface. For optimum transparency, the interior air of the pyramid is completely independent of the room, with a dust removal system and a slight over-pressure. The inverted pyramid refracts natural light to illuminate the underground space during the day, and at night there is a low-voltage lighting system to assist the illumination. The rainwater collection system is located at the four corners and these are hidden around the ring beam.
Under the sleek and stunning architectural effect of the two pyramids, the hidden structural engineers made great efforts. Even today, almost 30 years later, the structural design behind the pyramid is still admirable!