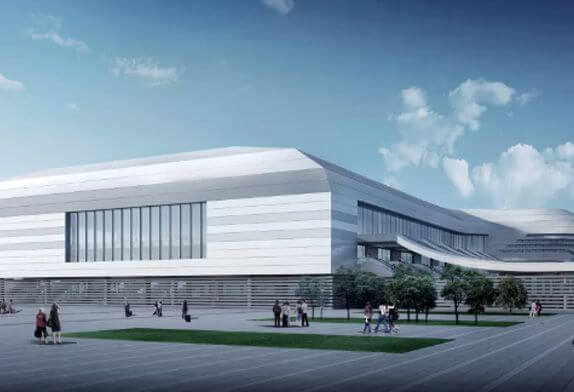 Due to size limitations, the general idea of the plan is to first assemble the CH and 1-2 axis space frames on the empty ground of the 1-3 axis and the C-J axis, use an 8t crane to assemble them and then make two 8m high temporary supports, and the assembly is completed. Then use two 100T wheeled truck cranes to lift the space frame, place one end on the support, weld the support with the embedded parts, and place the other end on the temporary support. The remaining HJ, 1-2 axis space frame, use The mobile frame is used for support, and the starting span is assembled. Use this area space frame as the starting plan to use air bulk to install and complete the space frame gradually.

(1) In order to reduce the accumulated error of the space frame during the assembly process, the assembly of the lower chord of the overall space frame should start from the center, assemble the vertical and horizontal axes first, and correct the size at any time. Only when it is considered correct can it be expanded from the center to the surrounding, which requires diagonal angles. The allowable error of the line (small unit) is ±3mm, the offset of the bottom chord node is 2mm, and the deviation value of the overall vertical and horizontal shall not be greater than ±2mm. (2) Check the geometric dimensions after the assembly of the overall lower chord. If necessary, use the theodolite to correct and adjust the height difference of each point with a spirit level, and make a record. (3) In order to facilitate the construction and improve the progress of the project, before the lower chord is assembled, the web rod and the upper chord rod can be seated according to the drawings and transported in place. (4) The assembly of the web rod and the upper chord should be carried out after all the lower chords are assembled, and on the basis of measuring no tolerance. The method starts from the center, and the geometric dimensions of the vertical and horizontal axes are checked at any time, and the correction is carried out to the surrounding. assembled. (5) Three points are suitable for spot welding when the space frame is assembled, and four points are suitable for those with large pipe diameters. During spot welding, arcs should not be started at any place other than the junction of the rod and the node. (6) After the space frame is assembled, weld the support, the winding suspension, and the welding ball.