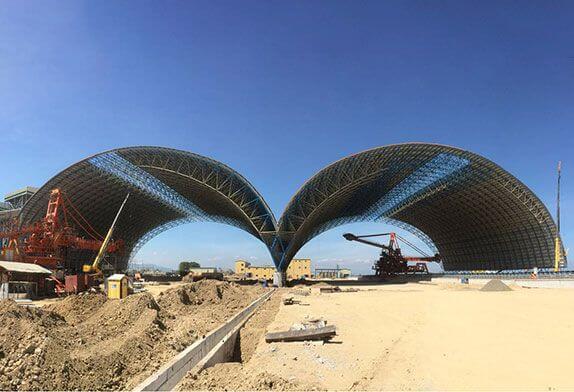 The key to the problem of excessive torsion is to see its feasibility:

First: Assume that changes in bearing conditions are not considered. The periphery of the lower chord is combined with the concrete, and the stress and strain caused by the temperature should not be large. Or, before pouring the concrete, apply a layer of oil on the concrete-clad space frame structure to avoid or reduce the temperature stress along the radial direction of the steel pipe.

If it is considered that the enclosed space frame is still a two-force member, then through trial calculations, It can be solved without changing the original rods and bolts.

But in fact, the stress of the steel pipe buried in concrete is a tension-bending or compression-bending component, then only define these members as beams to check calculations.
Second: The bearing situation has changed. Because concrete is poured around, the concrete part is in contact with the waterproof layer, that is, the waterproof layer has horizontal constraints on the concrete part. According to the actual situation, it can be considered that the space frame is a peripheral support, and the support condition can be considered as a fixed connection. Of course, some members still have to be defined as beams so that the deflection of the space frame can be reduced.

The wind resistance and heat preservation of the space frame structure