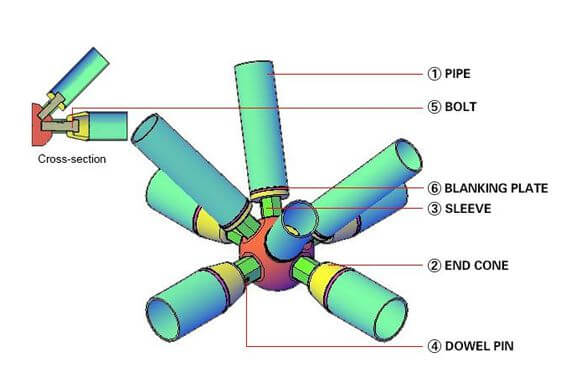 (1) It must be ensured that the reinforced concrete ribbed slab and the web and lower chord of the space frame can work together;

(2) The axis of the web rod and the central axis of the effective wearing surface of the ribbed plate as the upper chord should intersect at one point at the node:

According to engineering practice experience and experimental research results, the upper chord nodes of the combined space frame structure mainly have the following types:

(2) Welded ball missing node. The welded ball joint is formed by welding the stamped ball joint and the steel cover plate, and the ball joint usually uses a small hemisphere. It has the characteristics of high rigidity, simple processing and manufacturing, and strong connection direction of web rods.

(3) Bolt ring node-this is the upper chord joint steel used for the combined space frame structure that has passed the test, trial production and engineering application in our country. The 45 key is selected. The web can still pass through the high-strength bolt and the bottom chord bolt ball joint.

The steel structure of Guangzhou Baiyun Hangar project is topped

The advantages of space frame installation engineering and some attention requirements