The steel space frame of the dome coal shed is a large-span space structure system composed of bolt balls, force-bearing rods, and maintenance structures. No. 45 steel is used for the bolt balls of the connection nodes of the space frame; Q235B or 20# seamless steel pipes are generally used for the force-bearing members; Q235B. The network frame components are first processed, fabricated, and anti-corrosion treated in the factory to form independent parts with both ends closed, and then the parts are packaged and transported to the construction site. The space frame installation adopts the high-altitude assembly method of on-site loose parts. The installer first assembles small units on the ground and then lifts them to a high altitude for assembly to complete the structural system. Maintenance components such as purlins, purlins, and color plates are installed with high-strength bolts after the space structure system is fully closed and stabilized.

2 Causes and consequences of corrosion of steel space frame

In order to prevent the explosion of coal dust, the spherical space frames are all ventilated naturally. The outdoor air is drawn in from the space between the space frame shell and the concrete platform and discharged through the ventilation hall at the top of the spherical shell. A large amount of SO2 gas generated in the closed coal yard under the coal stacking condition and the humid air of the coal yard forms acid gas, which rises to the spherical shell space so that the space frame will be in a harsh environment of weak acid for a long time. Once any problems occur in the manufacturing, transportation, and on-site installation of the space frame, it will inevitably lead to the erosion of the passive film on the metal surface and cause the space frame to rust. Once the stressed rod begins to corrode, a pit will be formed on the surface of the rod, which will cause the surface of the rod to peel off in severe cases, reduce the thickness of the rod, and eventually reduce the bearing capacity of the stressed rod, affecting the safety of the space frame structure;

Erosion of the maintenance structure will cause the color plate to penetrate and tear, causing the space frame to leak and affect its use. The illustration shows a steel space frame in a domestic power plant that has only been in operation for three years. Due to corrosion, the equipment was out of service and had to spend a lot of money on an overhaul. 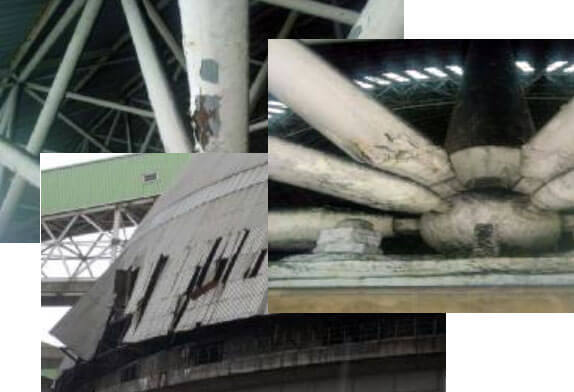 The coal bunker appears to be corroded

3 Principles and schemes of anti-corrosion of steel space frame

Due to the harsh working conditions and environment of the space frame structure in the closed coal yard, the risk of post-corrosion maintenance operations is extremely high and the investment is huge. Therefore, the anti-corrosion plan must consider the following principles:

Considering important industrial plants, the design anti-corrosion service life of space frame structure should not be less than 25 years.

（1）Hot-dip galvanizing of components: Hot-dip galvanizing is to pickle and remove rust, and immerse the thoroughly cleaned steel components in a molten zinc solution at a high temperature of about 600 °C so that a zinc layer of 80-120 microns is attached to the surface of the steel components. Anodic protection, so as to achieve the purpose of anti-corrosion. The advantages of this method are long durability, a high degree of industrialization of production, and stable quality. However, for the space frame rods and purlins, due to the process requirements for the production of components before galvanizing, the sealing plates at both ends of the components have been sealed, and the hot dip galvanizing is carried out under high-temperature conditions. The air expands and the head plate bursts, causing a safety accident. In addition, in terms of chemical properties, since zinc is more active than iron, zinc has an anodic protective effect on iron, iron will not be corroded, and zinc will be dissipated. However, in the special acidic environment of the closed coal yard, the soluble zinc sulfate salt produced by corrosion will slowly lose from the surface over time, thus aggravating the corrosion of zinc. The rods and purlins may be deformed due to temperature stress in the high-temperature zinc bath, which affects the stress of the rods. Therefore, it is not suitable to use hot-dip galvanizing anti-corrosion technology for steel space frames in dome coal yards.

（2）Thermal spray aluminum (zinc) composite coating for components: This is a long-term anti-corrosion method equivalent to the anti-corrosion effect of hot-dip galvanizing. The specific method is to first blast the surface of the steel component to remove rust so that the surface is exposed to metallic luster and roughened, and the rust removal level is Sa ≥ 2.5. Then use an acetylene-oxygen flame to melt the continuously sent aluminum (zinc) wire, blow it to the surface of the steel component with compressed air to form a honeycomb aluminum-zinc spray layer with a thickness of about 80μm~120μm, and then coat the epoxy sealing bottom on it. The coating is 20 μm; the intermediate layer is made of the epoxy micaceous iron intermediate coating once with a thickness of 40 μm; the surface layer is acrylic polyurethane top coating twice with a thickness of 60 μm, and finally, a composite anti-corrosion coating is formed.

This process has the following advantages for space frame anti-corrosion:

2. The surface temperature of the thermally sprayed zinc component is about 80 degrees, and the thermal influence is local and constrained, so the space frame members or purlins will not be thermally deformed;

3. The damage to the anti-corrosion layer during the transportation and installation of the components can be repaired on-site to avoid technological breakthroughs. The disadvantage of this scheme is: due to the difference in the expansion coefficient between different materials, temperature stress is easily formed between the coatings. Once the treatment is not good, the adhesion of the coating will decrease, resulting in shedding; the degree of industrialization is low, and sandblasting aluminum (zinc ) has high labor intensity and low efficacy; the zinc powder and zinc vapor produced by high temperature during spraying seriously pollute the environment; the spraying quality is greatly affected by human factors, requiring operators to have a strong technical level and sense of responsibility.