The cantilever space frame is widely used in the stand cantilever structure. The reason is that there is no support column at the front end of the cantilever space frame, which reduces the occlusion of the audience’s sight. Therefore, the structure is widely used in semi-enclosed stadiums. The common installation methods of this type of space frame are the overall lifting method, the scaffolding construction method, and the block hoisting method (traditional block hoisting method). The construction method introduced in this paper does not use any support frame or full-scale scaffolding during the installation process. It conforms to the structural stress principle of the space frame itself. When the fulcrum of the support is combined with the hoisting point of the crane, the static and dynamic are combined to change the instability into stability, and the block unit is in place and the dragon is completed, and no support frame is used in the installation process. This method has low construction cost, a short construction period, and little impact on other professional construction.

The division principle is: the block hoisting area needs to be divided into blocks according to the position of the support point, so as to ensure that the support point covered by the first hoisting unit makes the first block unit in place to be an independent and stable stress structure. When other hoisting units are in place, the support points covered by themselves are unstable systems, but they form a stable system after being spliced with the previous block unit in the air. Partitions and blocks are shown in Figure 1. 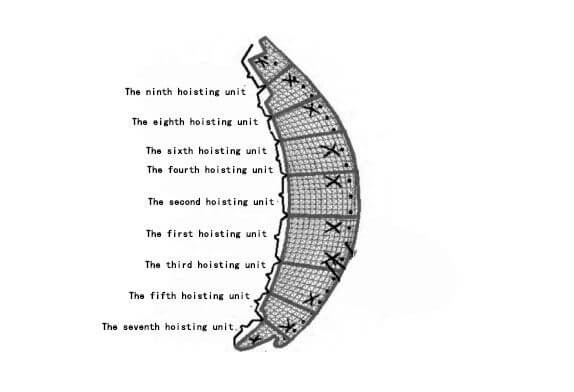 2.1 Ground assembly of the space frame

2.2 Use the tire frame to adjust the posture of the space frame on the ground

After the ground assembly of the space frame block unit is completed, the block unit can be hoisted into place. In order to control the accumulation of the overall installation error of the space frame by the aerial closure of the block unit, the first hoisting unit should select the middle unit for hoisting, and this unit is installed in the space frame. When the frame is divided into blocks, it has been set to ensure that the support points covered by it are a stable system after the in-place crane is unloaded. The support points covered by the rest of the hoisting units themselves are not enough to form a stable system, but they are supported by crane hoisting points during the installation process to ensure their stability. After the installation is in place, it can form a stable system after connecting with the adjacent installation units. In order to ensure the `stable positioning of the space frame, the in-situ hoisting method needs to be used, that is, to ensure that the block unit is assembled on the ground tire frame, which requires setting a chain hoist on the sling to adjust the length of the sling to ensure that the block is in the block. During the process of the unit being lifted from the ground to being dropped onto the support, the attitude remains unchanged, as shown in Figure 2. 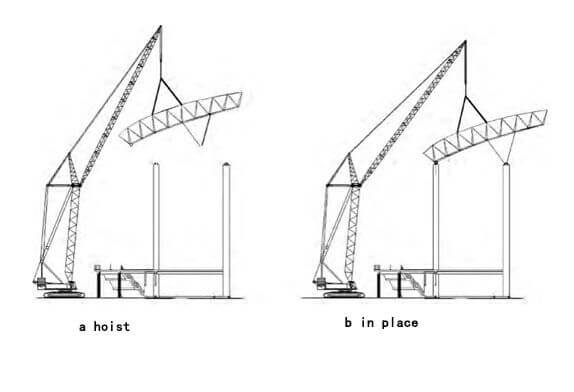 After the first hoisting unit is hoisted into place, it is necessary to re-measure and fine-tune the coordinate points of the unit so that the actual coordinate value is as close to the theoretical coordinate value as possible. The adjustment method is: after the block unit is placed, the crane unloads the force, and then uses the total station to measure the spherical coordinates of the four corner points of the block unit, and compares it with the theoretical value. After the net frame is lifted, cut the upper edge of the support plate at the corresponding position (the front end support is the lower end edge of the tree fork support). For the corner points whose actual elevation is less than the theoretical elevation, tighten the chain hoist on the sling at the corresponding position until it reaches Design the elevation, and then use the steel block to pad the gap between the bearing ball and the bearing rigid plate (the front end bearing is the gap between the bearing hemisphere and the tree fork support member), then loosen the chain hoist, and then adjust The coordinates of this corner point are re-measured. If due to the large deflection and deformation of the space frame, when the chain hoist is loosened, the elevation value of the corner point decreases greatly, the above operations need to be repeated.

Adopting the block hoisting technology without a support frame, most of the work of assembling and welding the space frame is completed on the ground, which greatly reduces the high-altitude operation, which is conducive to the guarantee of construction quality and reduces the construction safety risk. At the same time, compared with the high-altitude operation, the construction efficiency is improved. During the hoisting and installation of the block unit, there is no need to erect a temporary support frame, which solves the problem that the erection of the temporary support frame affects other types of work in the lower part, and at the same time reduces the investment in construction costs and saves resources.