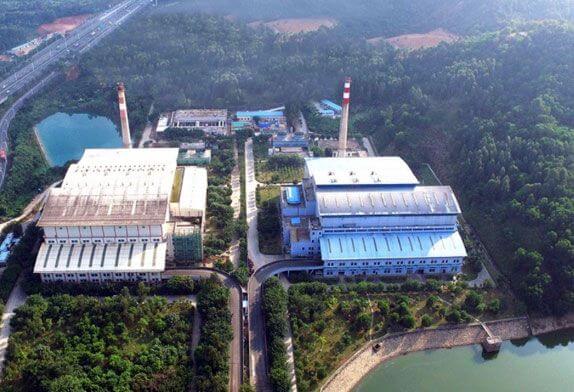 2 Construction technology of space frame roof in waste incineration power plant
2.1 Unloading hall space frame construction
The discharging hall adopts the square pyramid space frame, the node adopts the bolt ball node, the welded hollow ball node is used locally, and the string support is adopted. There are 38 bearings in total, and the bearings are arranged symmetrically. The size of the space frame is 100m×32m. The distance between the long side bearings is 10m, 7m, and 6m, a total of 32, and the gable walls at both ends are 3, and the distance between the bearings is 8m. The installation height of the network frame in the unloading room is not high. The unloading platform is directly below the network frame, and the site is flat. The ramp can be used to enter the truck crane, which is assembled and hoisted in blocks on the floor. The network frame in the unloading room is divided into 11 units, the heaviest of which is 10.46T. After assembling, a 75T truck crane is used for hoisting, and the assembling direction is from east to west (see Figure 2). 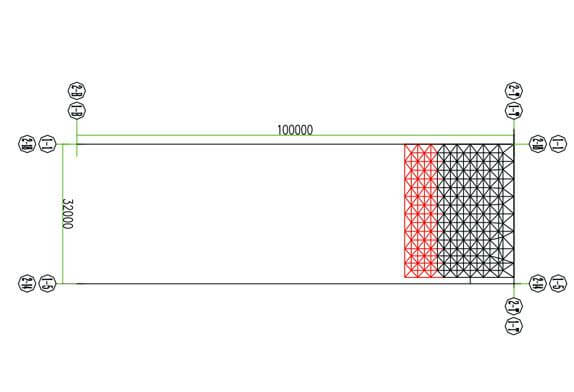 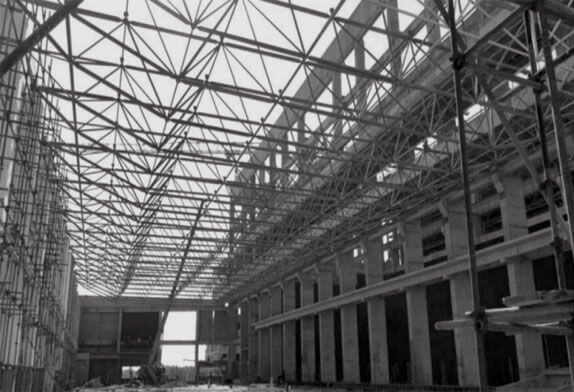 2.2 Construction of garbage tank space frame
The size of the space frame is 100m×35m. The distance between the long side supports is 10m, 7m and 6m respectively, a total of 32. There are 3 gables at both ends, and the distance between supports is 9m and 8m.
2.2.1 Construction idea of garbage tank space frame
Due to the particularity of the location of the garbage pond, it is difficult to cover the grid lifting machinery arranged on both sides of the garbage pond, so the garbage crane in the garbage pond can be used as the horizontal transportation tool of the space frame.
In order to reduce transportation distance and improve construction efficiency, the installation site of the garbage tank space frame is arranged between the south ramp and the garbage tank, and the installation site and mechanical station of the garbage tank in the north and south areas are arranged symmetrically.
Rubbish rack for welding net, twelve blocks when on the ground, complete the north and the south area adopt 250 t crawler crane for lifting equipment, in the car set-up support frame, lacing good ground grids to the supporting frame, and then each block network frame design of cranes to the specified location, until the space truss hoisting.
2.2.2 Sliding construction process of garbage pond space frame
The first piece of network frame is assembled on the ground, and the first block unit is placed on the support frame of the vehicle by using a 250T crawler crane, and the vehicle is pulled by an electric hoist until it reaches the design position. After the network frame is fixed, the vehicle is moved to the other side, and the second piece of the network frame is assembled and hoisted onto the vehicle. Similarly, the remaining grid units were slid to the designed position by means of the crane. Finally, the crawler crane was used to lift the last space frame unit into position to complete the hoisting work of the entire garbage pond space frame (see Figure 4). 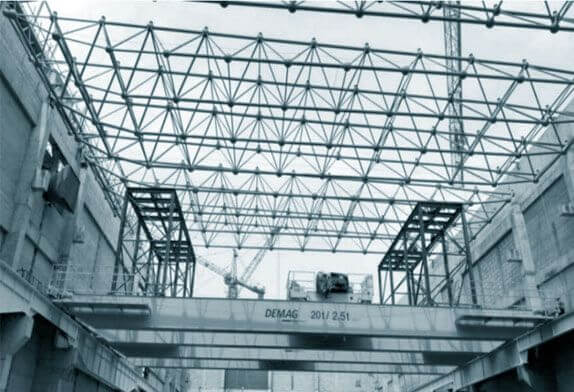 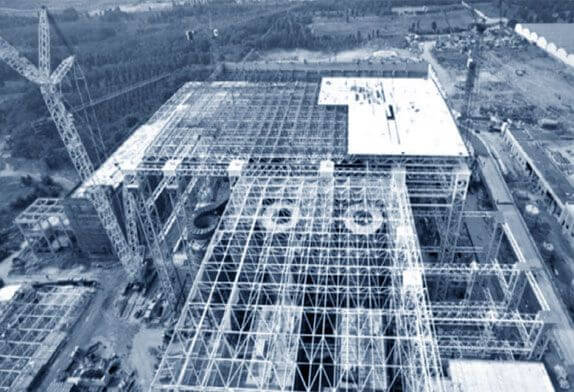 In the north area, the flue gas purification room adopts block hoisting to start and add high-altitude bulk. The first span starter frame is assembled in the first unit of the flue gas purification room, followed by high-altitude bulk.
Limited by site conditions, there is no large crane station on site. In order to ensure the smooth mending rod of the grid unit at a high altitudes, temporary supports should be set at the lower part of the starting span of the east and west grids. The west starting span is divided into four sections and hoisted in place by a 250T crawler crane, while the east starting span is divided into two sections and hoisted in place by 220T automobile crane. See Figure 6 for support layout. 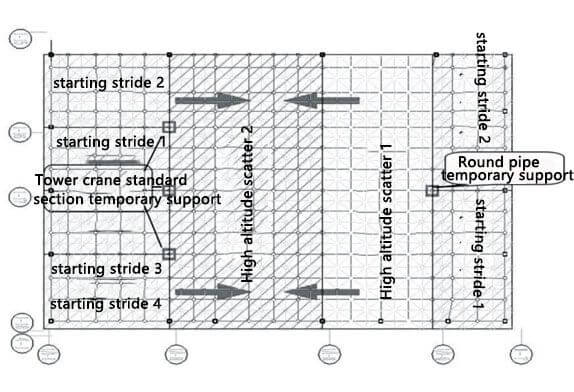 The first span network frame in the east was assembled on the ground and then lifted to the design position in two sections by a 220T truck crane. Then, on the basis of the initial span network frame, the network frame was scattered in the air and installed in one piece. After the completion of one piece of aerial assembling, the first span network frame in the west is assembled on the ground and hoisted into four sections to the design position by a 250T crawler crane. Based on the west starting piece and the high altitude scattered piecing 1 piece, from both sides to the middle of the high altitude scattered piecing to complete the overall grid combination installation work. In the process of assembling and hoisting, the structural stress is different from that in the design stage. On the one hand, boundary support conditions and structural stress systems may be different. On the other hand, the whole structural system is a process of gradual establishment, there is structural transformation, and part of the rod stress characteristics may change, so it is necessary to calculate several key working conditions in the construction process, the possible adverse factors for early warning, in order to ensure the safety of structural construction.