The steel space frame structure has the advantages of small space force, light weight, high rigidity and good seismic performance, and is widely used in the roof of public buildings such as gymnasiums, theaters, and exhibition halls. The disadvantage is that there are many rods at the nodes, the installation technology and accuracy are required to be high, the steel members are easy to corrode, and the fire resistance is poor, requiring regular inspection and maintenance. After the steel space frame has been put into use for a certain period of time, corrosion and other phenomena often occur, resulting in a decrease in its durability and a certain safety hazard. Therefore, it is necessary to carry out a safety appraisal on the existing steel space frame structure that has been used for a certain number of years.

The main body of ais designed as a 5-story frame structure, and the roof is a circular dome space frame structure. Its appearance is shown in Figure 1. The seismic grade of the project is grade 3, the seismic fortification intensity is 6 degrees, the design basic seismic acceleration is 0.05 g, and the design service life is 50 years. The project was completed in 2003 and has been in use for more than 15 years. In order to understand the current status of the space frame structure, Huaibei Sports Center entrusted Jiangsu Construction Engineering Quality Inspection Center Co., Ltd. to conduct a safety appraisal of the space frame roof of the project. 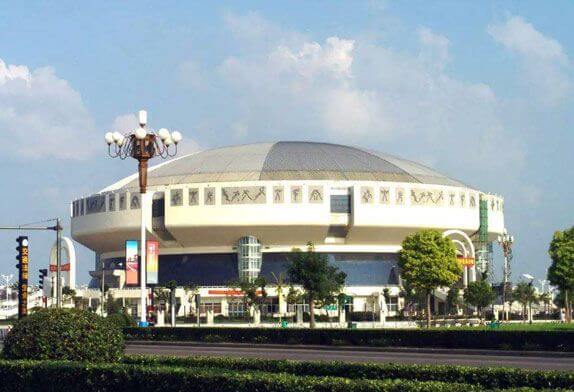 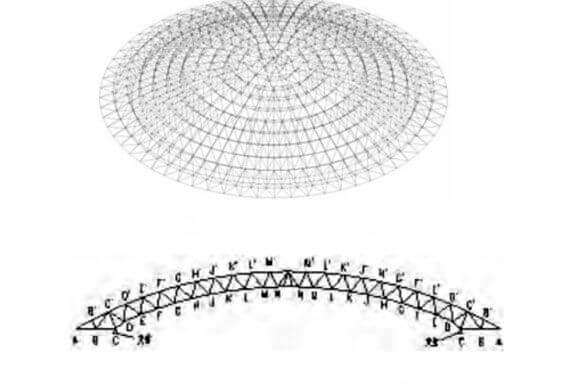 Checked the relevant test reports on Huaibei Gymnasium roof provided by the entrusting party. A total of 31 test reports of steel raw materials for space frame frames were checked, of which 8 were steel structure trusses, 6 were steel truss webs, and 15 were steel trusses. For the truss chords, two are the lower struts, and the steel space frame structure uses three types of steel: Q235B, Q355B, and 20# steel. All inspection reports are qualified. An overall steel structure inspection report was also checked and found to be acceptable.

The ultrasonic thickness gauge measures thickness according to the principle of ultrasonic pulse reflection. When the ultrasonic pulse emitted by the probe passes through the object to be measured and reaches the interface of the material, the pulse is reflected back to the probe. The thickness of the material being measured. In this appraisal project, the ultrasonic thickness gauge is used to detect the cross-sectional dimensions of the structural members and steel ring beams of the space frame. Before the test, remove the paint layer, oxide scale, rust, etc. on the surface of the structural member, and polish to reveal the metallic luster. Then apply the couplant to the place to be measured, couple the probe to the component to be measured, and then measure, and keep the contact coupling time for 1s~2s. Rotate the probe through 90° at the same position and make a second measurement, and take the average value of the two times as the representative value of the part. When measuring the wall thickness of the pipe, make the sound insulation layer in the middle of the probe parallel to the axis of the pipe. A total of 46 space frame members were extracted on site, and their diameters and wall thicknesses were measured. It was confirmed that the cross-sectional dimensions of the space frame members basically met the design requirements. The section size of the steel ring beam is measured, and it is confirmed that the section size of the steel ring beam basically meets the design requirements.

A general survey was carried out on the rubber bearings of the space frame structure, and it was found that the rubber of some bearings was partially detached, the limit plates of some bearings were tightly attached, and no obvious aging phenomenon of the rubber was found. then the deformation under the model calculation envelope condition. 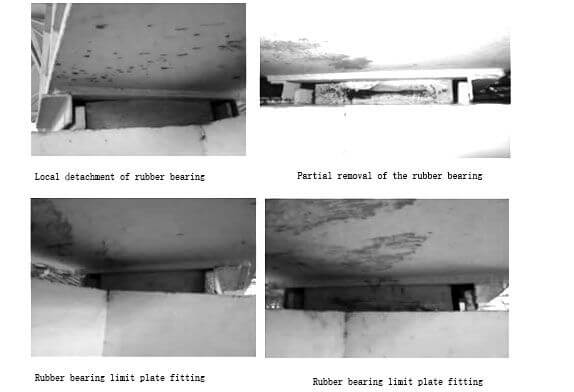 The factory splicing and butt welds of the engineering mesh components are all first-class welds, and other butt welds are second-class welds. After data verification, the test results of the steel structure weld flaw detection report are all qualified; some steel member welds were extracted on site for ultrasonic flaw detection, no excess defects were found in the tested welds, and the internal quality of the welds reached the “Steel Structure Engineering”. Construction Quality Acceptance Specification “GB50205-2001”.

The damage and defects of the structural members of the space frame structure of the project were inspected, and a few rods had local paint film peeling off, and some rods had the paint film aging. The results are shown in FIG.4 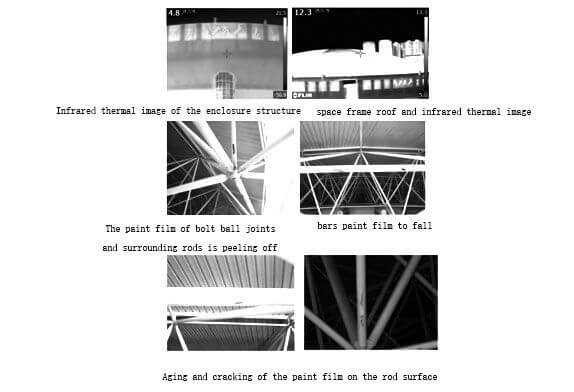 (1) Derusting and repainting the space frame rods with rust marks. (2) Release the tight rubber bearing limit plate. (3) Without technical appraisal or design permission, the layout, purpose and use environment of the structure shall not be changed, and the use load shall not be greater than the design and check load. (4) Regularly inspect and maintain the main force-bearing components every year. If any problems are found, a qualified testing agency should promptly inspect and identify its structural safety, and a qualified design and construction unit should be invited to carry out corresponding technical treatment.