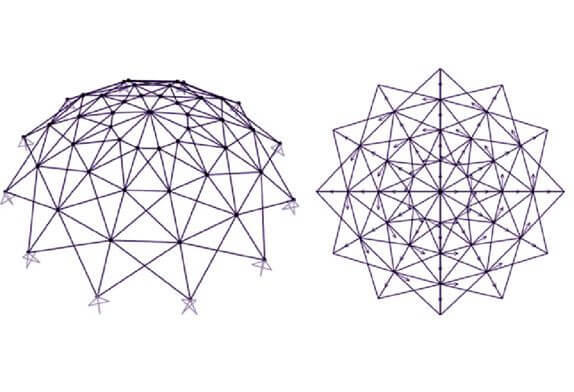 The dome of the Pittsburgh Public Auditorium, built-in in 1961, is close to a circle in the plan, with a maximum diameter of 127m and a height of about 33m. Built in 1976, the New Orleans Superdome in the U.S. with the largest span in the world at that time used a K12 spherical reticulated shell with a circular plane diameter of 207m, a vertical height of 83m, and a thickness of 2.2m. It can accommodate 72,000 spectators. The opening and closing dome gymnasium in Fukuoka, Japan, with a diameter of 222m, was built in 1993. The building plane is circular, and it is composed of three fan-shaped plane rotatable spherical reticulated shells. Japan’s Oita dome built for the 2002 World Cup has a maximum span of 274m and an opening area of 29,000m2.

With the increasing development of people’s requirements for the diversification of architectural functions and architectural shapes, as well as the maturity of welding technology and the rapid development of computer technology, the dome reticulated shell structure developed rapidly under new conditions. In 2005, the steel-cable-membrane structure of the dome of Nanning Convention and Exhibition Center with a diameter of 60 meters was built, with a total construction area of about 150,000 m2. It is 296.4m, the highest point is 68.5m, and the lowest point is 42.8m. The audience can hold more than 90,000 spectators. Judging from the development of large-span dome reticulated shell structures, the era of super-large dome buildings has come.

How to deal with the collision of rods at ball nodes