With the rapid development of the economy and society, large span space frame buildings are used more and more in production and life, mainly in corporate workshops, warehousing, and shopping malls. The people in the building are highly concentrated, and the materials are dense. Most of the raw materials and finished products are combustibles, even inflammable and explosive materials, and toxic chemicals. 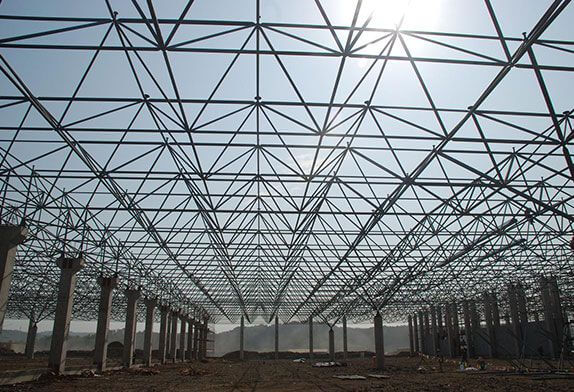 From the point of view of the use function and performance of the building, the accidents of large-span buildings with space frame structures in fires mostly occur in warehouses and workshops. The workshops and warehouses used for production usually store a large amount of production raw materials, semi-finished products and finished products. The building structures are mostly steel frame structures and reinforced concrete structures. After being heated, the strength changes drastically, and the collapse of the building is very likely to occur. Such as March 2015, Pudong Arowana. A fire broke out in the logistics storage center, and the storage warehouse burned violently with the help of edible oil, causing the steel structure warehouse to deform and collapse. In January 2020, a fire broke out in a large-span workshop of Shuikang, Jinhua, Zhejiang. A large number of battery packs, plastic pellets, etc. were stored in the building. The plastic raw materials and production products burned violently, causing one side of the workshop to collapse rapidly.

1.2 The material and structure of space frame building 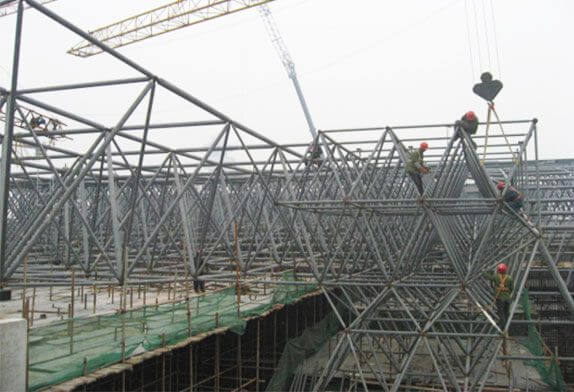 From the analysis of the performance, material, and structure of the space frame structure, the overall collapse is the main collapse method of the large-span space frame structure. Due to the limitation of the fire resistance limit of building materials, the performance and strength of the building materials themselves change significantly, and the bearing capacity continues to decline, resulting in the overall collapse of the building body. , resulting in the loss of strength of the main body of the steel structure under the action of high temperature, resulting in an overall collapse accident. At the same time, since the roof of the composite structure workshop is made of steel structure, the roof is obviously affected by the high temperature of the flame, which causes the main body of the steel structure to lose its supporting force, resulting in the collapse of the roof. The collapse of a single floor is mainly affected by the ignition point. The first floor to catch fire has the highest flame temperature, and it is easy to cause the roof to collapse. The flame enters the higher floor, causing the building to collapse continuously.

(1) Buildings with different functions and properties have different fire conditions. In an environment with good fire-supporting materials and combustion conditions, the fire intensity is high, the rescue is difficult, the collapse time of the building is short, and the overall collapse accident is prone to occur.

(3) The space frame structure objects are mostly surrounded by steel-concrete structure walls. Therefore, the collapse of the roof is a frequent area of building collapse. 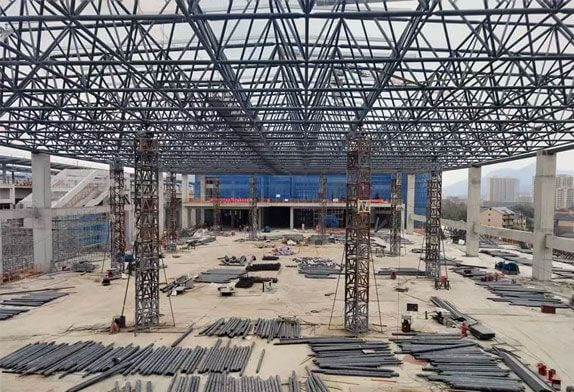 The smart fire protection system uses probabilistic algorithms to evaluate the probability of fire accidents and building collapses in different forms of factories, so as to accurately understand the risk points of fires. Because the calculation process and the use process can reflect the intelligent characteristics of modern technology, Therefore, it is named as the intelligent fire protection system. From the perspective of unit management, most of the large-span buildings with space frame structure have the phenomenon and problems of private construction. If they cannot be detected and controlled in time, it will affect the probability of fire and the difficulty of rescue. Therefore, it is urgent to build a smart fire protection system and strengthen the management and supervision of enterprise production. The smart fire protection system can be divided into two parts, the first part is the civil configuration, and the second part is the public configuration. Usually, the public configuration can be divided into the supervision system and the fire force calling system. The system was created by social enterprises and has been used in the public fire protection field of some cities. It can timely discover the risk points existing in the enterprise, and carry out targeted rectification and governance.

The large-span building with a space frame structure has large internal space, a smooth interior, and many combustibles, and the fire spreads easily and quickly, forming three-dimensional combustion. In the process of fire development, the size of the fire is mainly related to the airflow, oxygen content, and the quality of combustibles. The airflow is the booster for its advancement, and the direction of the fire is usually the direction of the arrangement of combustibles. Therefore, in large-span buildings with space frame structures, a scientific fire compartment should be established to cut off combustibles, and the fire compartment and combustible warehouse should be kept as closed as possible to prevent air convection in the area where combustibles are located. South windows and high north windows can be used. Low or single-window interior design form, neither affects indoor lighting nor can it form an environment that helps the fire grow, thereby effectively suppressing the burning speed of fire and reducing the internal fire.

Due to the different materials, structures and functions of the building, the probability of fire collapse accidents is different, and the daily supervision forms will be increasingly diversified. Various high-tech equipment is used in fire prevention, and the future direction of fire hazard control will be more intelligent, scientific and digital.

What are the advantages of sports stadium membrane structure