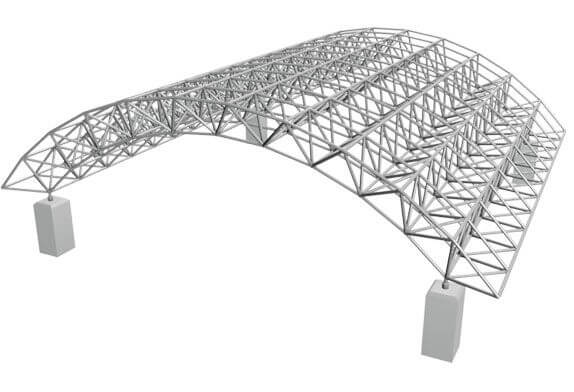 For the large-scale space frame installation project, the roof of Beijing Capital Airport T3B terminal building is a large-span hyperboloid evacuated triangular-cone mixed-node space frame structure, which is similar to the roof of Zhengzhou Grand Theater. The side truss is installed first, and then the internal space frame is installed. The side truss is assembled on the ground and accepted on the ground. The crane is used for segmented hoisting and high-altitude installation. The internal curved space frame is a combination of bolt ball-bar connection and welding ball-bar connection and adopts the installation method of high-altitude splicing. Shanxi Xiaoyi Gymnasium Mixed Node Steel space frame Project adopts the method of combining high-altitude bulk accumulation lifting and space fixed. The steel structure space frame roof of Guangxi Lipu Gymnasium and the steel space frame of Nanjing Youth Olympic Sports Park indoor track and field hall adopt the high-altitude bulk method and are installed from one side to the other. The Nanning East Railway Station roof space frame steel structure project adopts the construction technology of cumulative lifting of space frame structure combined with horizontal tension. The projected area of ​​the space frame on the roof of Zhengzhou Grand Theater is about 16,000m2. The space frame adopts the structural forms of the orthogonal quadrangular pyramid, oblique quadrangular pyramid, triangular pyramid, and partial evacuation of the lower chord. A large number of welding balls are concentrated above the stage, concert hall, and auditorium. It is a mixture of bolt balls and a small number of welding balls, and the overall appearance is special. When the space frame begins to install, the professional civil engineering walls and floors below have basically been formed, the traffic of large-scale hoisting equipment is blocked, the site conditions are very limited, and the installation is difficult.

In view of this, the Grand Theater adopts a reasonable selection of starting units, sets up temporary fulcrums, and gradually expands the overall route of bulk packing around; the space frame is divided into three areas: A, B, and C, and the welded ball space frame is constructed in each area first. Post-construction bolted ball net frame; modular assembly technology is adopted for the installation of bolt ball net frame; under the circumstance of a limited site and complex construction environment, full-scale scaffolding is erected to form a large-area operation platform.

The Grand Theater is generally divided into three areas: A, B, and C. According to the characteristics of the project, the flat roof space frame structure is divided into six areas for construction. One area is selected as the starting unit, and the scaffolding is erected in the order of one to six areas. Operate the platform for high-altitude bulk construction. 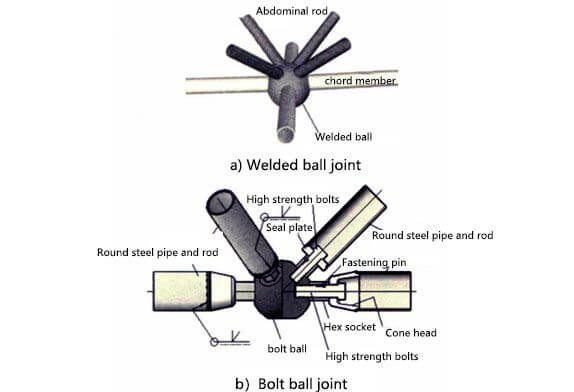 1) Putting the ball: Put the accepted solder balls into the installation node according to the specifications and numbers, and adjust the direction and position of the force at the same time. Generally, the annular weld of the horizontal centerline of the ball is placed in the equatorial direction

2) Placing rods: Arrange the prepared rods according to the specified specifications. Before placing the rod, check the specifications and dimensions of the rod, as well as the groove and weld gap, place the rod between two balls, adjust the gap, and fix it.

3) Welding: First lower the chord node, then the upper chord node, and spread welding from the middle to both sides. All welds of each node are welded for the first time and then welded for the second time to prevent the deformation of the space frame caused by stress concentration.

Area A, Area B, and Area C are unloaded at the same time (the temporary fulcrum is removed) to complete the whole process. During the unloading process, use a jack to slightly lift upward at the unloading point position, cut off the steel pipe at the support point, and unload several groups of fulcrum points to descend synchronously. dismantling supports.

1) By reasonably dividing the construction area and selecting the starting unit, the working face can be unfolded in an orderly manner.

3) The unit modular assembly is adopted, which improves work efficiency.

4) Temporary point support is adopted in the installation process, which reduces the erection of a large number of supports, saves steel, and reduces costs.