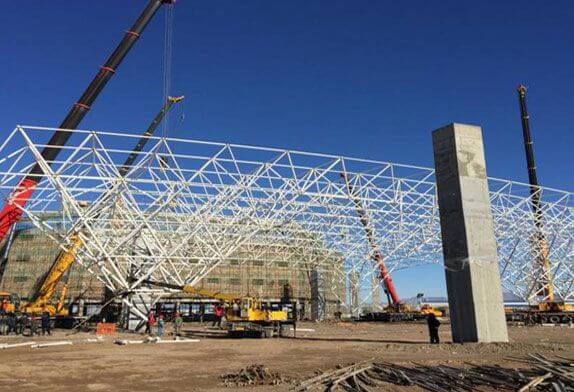 Each rod in the space frame structure is not only a force rod, but also a support rod, and work together with each other. Therefore, it has large spatial rigidity and good integrity, and can carry concentrated loads, asymmetric loads, and dynamic loads. Advantage.

The space frame structure can be adapted to the requirements of industrial plants and public buildings with different supporting conditions, and the shape of the building plane is not high. It is suitable for polygons, squares, circles, triangles, sectors, and various planes combined therefrom. The shape of the building can be used in both long-span roofs and small-span roofs. Facilities such as pipes, lamps, suspended ceilings, and maintenance horse paths can also be set in the internal space of the space frame. Regarding the large-span workshop, the setting of the suspended crane can be completed along the vertical and horizontal directions, which is better suited to the process requirements.

The space frame structure has a uniform texture, is lightweight, has very good ductility, can absorb a large amount of seismic energy, and has good overall stability. Therefore, its seismic performance is strong.

3.4 The degree of industrialization of production and installation is relatively high, and the construction period is short

The size and shape of a large number of nodes and rods in the space frame structure are consistent, which is convenient for mass production in industrialization, and the on-site assembly is relatively simple, which can improve the construction speed and shorten the construction period, thereby creating conditions for improving the economic benefits of the project.

3.5 The building is beautiful in appearance

The space frame structure has the advantages of a beautiful appearance, lightweight, strong decoration, and convenient construction. For example, the use of relatively large overhangs in public buildings can not only enrich the shape of the building but also ensure that the force of the space frame components is more reasonable. . The use of space frame roofs (four-point support leakage) in sports buildings can make the majesty and stiffness of sports buildings manifest. In addition, the exposed or directly exposed part of the specific space frame of the ball joint of the steel pipe member can show the regularity of the geometric figures, and finally, form a relatively unique structure with rhythmic beauty.

At present, there are many general design programs and space frame structure analysis software in China, and some units are already using targeted software, which can directly complete the drawing of construction drawings. In terms of structural calculation, there are also many approximate calculation charts suitable for the decoupling design of different types of space frames. All these provide favorable conditions for the calculation and design of the space frame structure. In addition, due to the singleness of the nodes and members of the space frame, the number of structural construction drawings is also small, so the workload of engineering designers can be reduced.

4 The form of the space frame structure

The arching of the space frame is designed above the roof, mainly to keep the upper and lower chord members of the space frame parallel, and attention should be paid to raising the entire space frame in the middle of the span, and the height of the arch needs to be determined according to the roof drainage slope. This design method can Improve the seismic performance of the structure. However, it should be noted that if the camber angle is high, it will have a certain impact on the internal force of the rod.

5.2 The upper set of the small column of the winding node

6.1 Use of Symmetry in Computation

The space frame structure is a high-order statically indeterminate system, but the interior of the members and the displacement of the nodes need to be controlled by the final load state. If the structural system itself and the loads it bears have symmetry, in order to reduce the computational workload, 1/2n of the entire space frame can be selected for analysis.

At present, steel plate joints and ball joints are more commonly used, and ball joints mainly include bolt ball joints and welded hollow ball joints. 1) Steel plate joints. The characteristics of steel plate joints include many parts, complex forces, and many welds. If the internal force of the chord is large, it cannot be connected with an external cover plate, and the force transmission can only be carried out on the basis of the gusset plate. This will make the internal force distribution of the gusset plate more complicated. In the welded steel plate joints, if the strength of the fillet welds is relatively poor, the connection design joints based on fillet welds and slot welds can be used to ensure that the centers of gravity of the intersecting members meet at one point. At the same time, it is necessary to ensure that the bars The center of the section of the member and the center of the connecting weld of the member are coincident to avoid eccentric force. 2) Weld the hollow ball node. Welded hollow spherical joints are widely used in various space frames of steel pipe members. The advantages include: the sphere has no directionality and can be connected with rods in any direction so that the steel pipe is perpendicular to the axis, the connection with the hollow ball node is easy to center, without eccentricity, and the node force is very clear. 3) Bolt ball joint. Bolt ball joints are small, lightweight, and very aesthetically pleasing. Each node can connect up to about 18 members. The welding workload at the nodes is less, the installation is very simple, and certain disassembly can be implemented. It can be used in all kinds of space frames, especially in space frames composed of quadrangular pyramids and triangular pyramids. However, this kind of joint still has some disadvantages: high price, complicated sphere processing, poor rust resistance, internal and external galvanizing, and the bolt ball joint belonging to the corresponding hinge.