The sports center includes a stadium, a gymnasium, and a swimming pool. The total construction area of the stadium is 44,064m2, and the number of spectator seats is about 30,000. The length of the building is 295.8m from east to west, and 296.5m from north to south. The plane of the prefabricated stadium is projected into an “elliptical ring”. There are 2 floors above ground (partially 4 floors), the south stand has a basement in part, and the building height is 46.13m (the highest point of the building). The crescent-shaped canopy on the upper part of the canopy is made of a steel space frame, aluminum-magnesium-manganese metal roof panel, and the mesh frame is in the form of a combination of multi-point support and the front arch (tube truss), as shown in Figure 1. 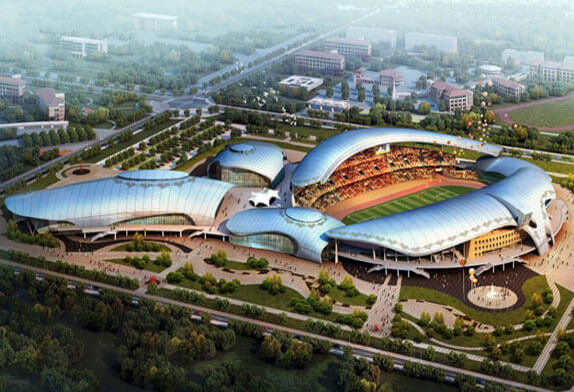 The steel structure of the crescent-shaped bleacher canopy is mainly a combination of a double-layer curved bolted ball space frame and a front-end arch. The front-end arch and the landing place are partially made of pipe trusses. The canopy is divided into two parts: east and west and is symmetrical from east to west. The cross-section is shown in Figure 2. The support of the space frame structure is provided with an outer ring and inner ring support, which are located at the top of the lower concrete V-shaped column. The elevation of the highest point of the outer ring support is 28.700m, and the elevation of the lowest point is about 3.000m. The elevation of the highest point support of the inner ring is 22.000m. The outer ring support is an ordinary space frame cross-shaped support, and the inner ring support is double-limb oblique support. The cross-section of the rod is Φ325mm, which is connected by pins.

The front canopy of the steel structure is a double-split triangular arch truss. The arch truss spans the entire steel structure canopy and falls to the ground. The highest point of the truss is 43.300m, the highest point of the steel structure canopy structure; The multi-point support is supported on 4 independent large concrete piers, and the arch truss support adopts welded hemispherical cross-shaped stiffening support. The stand canopy is mainly composed of a double-layer curved grid frame and a pipe truss. The grid frame is mainly in the form of bolt ball joints. The steel ball is made of 45-gauge steel and the steel material is Q345B. The front-end arches are in the form of pipe trusses, all made of Q345B, and the truss members are connected in an intersecting manner.

3.1 Cancel the factory pre-assembly procedure and assemble on site

It was originally planned that the pipe truss be made in sections according to the hoisting unit, pre-assembled on the tire frame, and then assembled on site. However, due to the large span and high height of the pipe truss, a lot of manpower and material resources were required for pre-assembly, and the construction period was not allowed, so it was canceled. The factory pre-assembles the program, and it is assembled directly on-site. If the precision control is not good, it will not be able to close the dragon, which increases the difficulty of construction.

3.2 Segmentation and temporary support of trusses

The main arch steel truss at the front end of each canopy has a span of about 287m and a total weight of 385.36t. Considering the economy and rationality of the construction, the arch truss is divided into 9 sections for hoisting, and a total of 8 temporary support frames are set as a symmetrical structure.

The stadium arch truss is hoisted with a spatial structure system supported by a temporary support frame. The support removal process is a process of structural system transformation. The structural deformation and internal force redistribution and the fulcrum reaction force of the support tire frame will also change with the different unloading schemes and unloading sequences. In order to ensure that the structure and the tire frame are not damaged during the unloading process, a reasonable unloading sequence and unloading level must be selected. Based on structural calculation and analysis, with structural safety as the purpose, deformation coordination as the core, and real-time monitoring as the means, the construction process should strictly follow the above principles. The inverted triangular curved arch truss has a large span and high height, which is rare in China. The construction technology of segmented hoisting and high-altitude bulk loading has overcome many construction problems, such as the design and erection of temporary support frames, aerial measurement and positioning, High-altitude assembly and welding, overall unloading, etc.