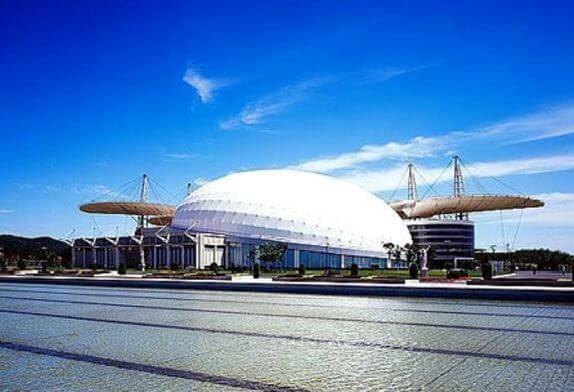 The main functions of Dalian International Film and Television Art Center are performances, conferences, etc. The main structure is a half ellipsoid, with a long axis of 60m, a short axis of 45m, and a height of 15m. The main structure is equipped with a performance swimming pool, which is insulated with double-layer membranes. The total construction area is 8,000m2, of which the membrane covers an area of about 2,000m2. Outside the main part of the structure, there are 7 wing-shaped decorations of different shapes and sizes, and the lower surface is covered with film. Among them, 5 larger ones are suspended on a lattice column. The largest decoration is 51m long and 18m wide.

The roof of the main structure of the project is a half ellipsoid reticulated shell, which is rotated 7.407°around the 45m-long axis to obtain the shape of the roof. The reticulated shell is supported on the concrete ring beam. The project adopts a skeleton-type double-layer membrane structure, and the internal skeleton adopts a single-layer ellipsoid shell with local assistance, and the grid size is about 2.5mx2.5m. After the force analysis and comparison and the requirement to suspend the cable on the shell surface, four ribs are set parallel to the short axis direction of the reticulated shell, one rib is set parallel to the long axis direction, and five ribs divide the reticulated shell into 10 areas. Dalian is relatively cold in winter, and there is no large-scale project that adopts double-layer membrane structure for thermal insulation in northern my country. Therefore, the thickness of the air layer between the double-layer membranes is as close as possible to the thickness of the reticulated shell rod. Practice has shown that the thermal insulation effect of this method is better.