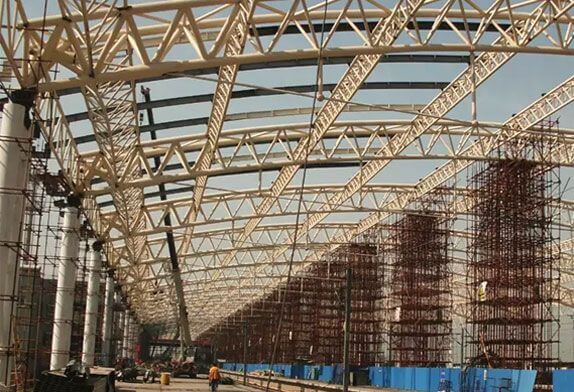 The basic form of the truss roof structure is related to its use. Generally, its shape can be divided into a triangle, trapezoid, parallel chord, and arch, etc. The commonly used forms of truss web members are herringbone, cross and Funk.

Regarding the classification of truss structures, they can be divided into plane truss structures and space truss structures according to their force characteristics and the arrangement of members. The support ensures the lateral stability of the structure; the section of the space truss structure is usually triangular, and the triangular section is divided into two types: regular triangle and inverted triangle. The design, manufacture, and installation of the plane truss are relatively simple, but its out-of-plane stiffness is poor, and the amount of steel used is correspondingly large; while the space truss structure has rich shapes, simple and smooth lines, and relatively few, in exhibition halls and waiting halls. It is widely used in large public buildings such as gymnasiums and gymnasiums and is suitable for rectangular planes. Space trusses not only have the advantages of plane trusses but also have better spatial rigidity, better mechanical performance, and low steel consumption.