Comprehensive analysis of the concept of the plane truss system 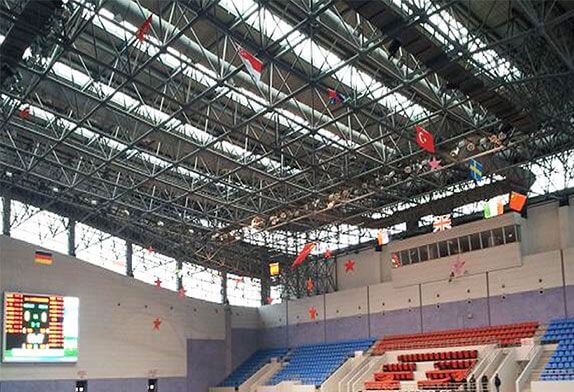 The space frame is a kind of net-like three-dimensional rod system structure composed of many rods according to the requirements of the building shape and arranged according to certain rules, and connected by nodes. Xuzhou Jialian Construction Engineering Co., Ltd. will give you a detailed introduction to the plane truss system.

The concept of a plane truss system

The space frame itself is a geometrically variable system. It is suitable for the situation where the building plan is square or close to square and the span is small. The internal force of the rods in the two directions has little difference, and the force is more uniform. It consists of two groups of plane trusses parallel to the boundary at 90° crossing each other. The length of each plane truss in the same direction is the same.

The short truss has the effect of embedding and fixing the long truss, and the force is favorable. The corners produce pulling force, often in the form of no corners. The space rigidity is larger than that of the orthogonal orthographic space frame, the force is even, and the steel is saved. It is suitable for the situation where the building plan is rectangular.

The space frames are placed diagonally across the two synclines, and the short trusses have the effect of embedding and fixing the long trusses, and the force is favorable. The corners produce pulling force, often in the form of no corners.

Geometrically invariant system, the space frame has large spatial rigidity, good force performance, and internal force distribution is relatively uniform. The number of rods is large and the node structure is more complicated. The three-way space frame is suitable for large spans and the building plane is triangular, hexagonal, polygonal and circular. It is composed of plane trusses intersecting each other, the upper and lower chords are of equal length, the types of members are few, and the upper and lower chords and web members are in the same plane. Generally, the oblique web rod should be pulled and the vertical rod should be compressed. The angle between the oblique web and the chord should be between 40° and 60°.

What are the support methods of the space frame structure