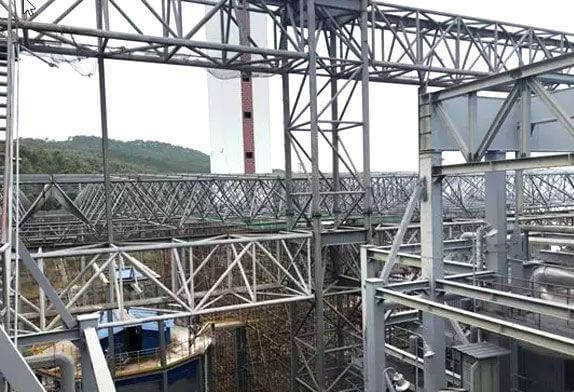 As the “blood vessel” of the power plant, the coal transport trestle connects the coal yard, the transfer station, and the coal bunker of the main powerhouse to provide raw material guarantee for the steam turbine generator. The coal-conveying trestle is generally in the form of reinforced concrete columns or steel columns supporting the upper structure of the continuous truss of the steel structure. Coal conveying belt conveyors, maintenance channels, cable bridges, etc. The trestle is divided into the closed type and open type according to functional requirements; single or multiple coals conveying belt conveyors can be arranged according to the size of the coal conveying. Due to the limitation of belt conveyors, the inclination angle of the coal conveying trestle is usually 0°~16°. When the inclination angle is greater than 10°, the maintenance channel needs to be set with steps for maintenance.

The upper and lower chords of the steel truss of the coal conveying trestle should be made of hot-rolled H-beams, and the webs should be made of square steel pipes, round steel pipes or double-angle steels, so as to be light and beautiful, and easy to construct. The steel truss form of the open-air trestle should adopt the inverted triangular pipe truss. The height of the reinforced concrete column section of the coal conveying trestle can be taken as H/25～H/20 (H is the distance from the top surface of the foundation to the bottom of the trestle steel truss support); The height of the trestle column.

(1) Seismic joints shall be set up between the coal-conveying trestle and adjacent buildings in accordance with Article 11.8.1 of the Technical Regulations for the Design of Civil Structures of Thermal Power Plants (DL5022-2012).

(6) The fire hazard of the closed coal trestle is Class C, and the fire resistance level is Class II. When no automatic fire extinguishing system is installed, fire protection measures shall be taken for its steel structure.

The coal transport trestle is an important thermal power plant building. When arranging its columns, the arrangement of surrounding structures and pipelines must be considered. Rigid spans must be arranged in the trestle, and economical spans should be selected as far as possible. In the calculation of the trestle bridge, finite element software must be used to complete the modeling and calculation work. In the calculation, various loads borne by the trestle bridge must be considered, and the connection method between the trestle bridge members must be simplified, so as to obtain the correct internal force and deformation results, and guide the design and construction.