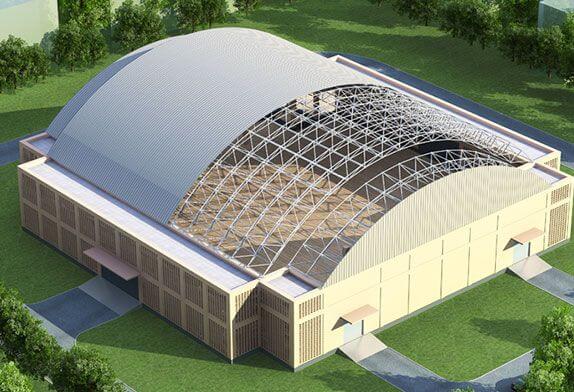 The dead load mainly includes the self-weight of the space frame structure, purlins, roof panels and other overlying materials.

There are usually three ways to support the reticulated shell structure: the upper chord, the lower chord and the upper and lower chords are supported together. Compared with the bottom chord support, the upper chord support reduces the peak internal force by 34%, and the internal force of the rods is evenly distributed. Therefore, the top chord support method is widely used in the large-span cylindrical space frame structure. The design of the bearing nodes should be as close to the actual boundary conditions as possible. The fixed hinge bearing is generally used in the reticulated shell structure, and the force is reasonable, the calculation model is basically the same as the actual force, and the amount of steel is small. Large-span space frame structures usually use bolted ball joints, which are characterized by only axial force in the rods, no bending moments, and fast construction speed. When working at high altitudes, the construction quality is easier to guarantee.

The construction method directly affects the quality, schedule and cost of the project. Commonly used construction methods for large-span space frame structures include high-altitude bulk method, split (strip) block installation, high-altitude sliding method, and overall lifting method. The high-altitude bulk method requires a large amount of high-altitude operations and requires too much material to build the assembly platform; the space frame structure unit after the division (strip) installation method should have sufficient rigidity, otherwise temporary reinforcement Measures: The high-altitude sliding method can reduce a large number of high-altitude operations and ensure the quality and safety of structural construction; the advantage of the overall lifting method is that it can ensure the quality of the nodes and the accuracy of assembly, but it has higher requirements for lifting equipment. In actual projects, economic and reasonable choices should be made from comprehensive considerations such as construction period, site conditions, mechanical equipment, and construction technology level.