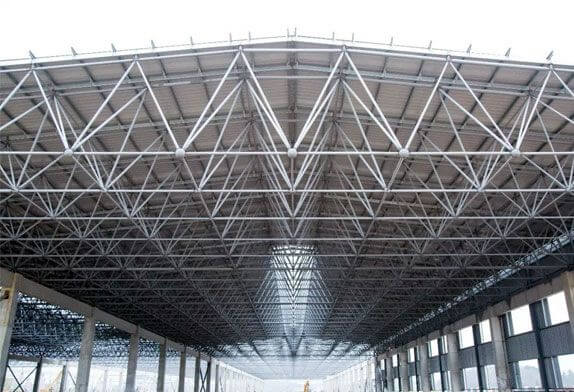 (1) space frame structure. It is widely used in the roof structure of gymnasiums, exhibition halls, clubs, theaters, canteens, conference rooms, waiting rooms, hangars, workshops, etc. It has the characteristics of a high degree of industrialization, lightweight, good stability, and a beautiful appearance.

(2) Suspension cable and cable truss structure. A series of cables are used as the main load-bearing components. These cables are composed of various forms according to certain rules and are suspended on the corresponding supporting structures so that the strength of the material can be fully exerted under tension. It is suitable for large-span roofs and has the characteristics of saving steel, beautiful appearance, and complicated design and construction. 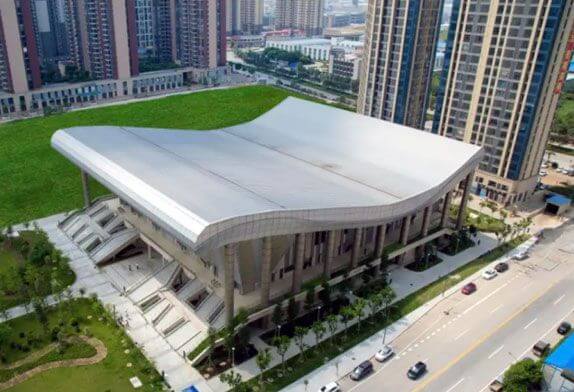 (2) The building structure and function are complex. Most of the large-span steel structure buildings are industrial buildings, where machinery, equipment, raw materials and finished products are piled up. In addition, in order to meet the needs of production and technology, the upper part of modern large-span steel structure buildings is equipped with various pipes such as ventilation, water, central air conditioning, and steam pipes. There are also flammable gas and oil pipelines installed, and the outer walls and partition walls are mostly made of iron sheets and polyurethane. In addition, some non-load-bearing components, such as roofs, ceilings, floors, etc., and other decoration materials use polymer organic materials. These have greatly increased the sources of danger in the building.

(2)Large-span steel structure building fire: fierce fire, densely populated, large load, fast heating, and difficult to put out. The large-span steel structure building has a large space and sufficient air. Once a fire occurs, the fire can spread in all directions, burn violently, and it is easy to generate strong high-temperature smoke to form and spread, resulting in large-scale burning. Large-span steel structure buildings are densely populated and have a large fire load. When fighting fires, there are many obstacles, making it difficult to evacuate people, and it is easy to cause mass deaths and injuries. On April 5, 2003, a fire broke out in the steel-structured cooked food processing workshop of Qingdao Zhengda Co., Ltd. Due to improper handling and poor evacuation at the beginning of the fire, the employees on duty blindly escaped, resulting in 21 people being burned to death on the spot.

The purpose of fire protection for large-span steel structure buildings is to increase the fire resistance limit of the steel structure to the limit range specified in the design specification, and the measures are various. Spraying fire retardant coatings has the characteristics of convenient construction, lightweight, low cost, not limited by the geometry of components, the widest application range, and high efficiency. It is a relatively common and relatively mature practice.

According to the thickness of the fireproof coating, it can be divided into thin coating type, thick coating type, and ultra-thin type.

Although long-span steel structure fireproof coating plays an important role and fully reflects its value in construction engineering applications, in addition to its own advantages, it also has defects. In terms of production and construction, most of the domestic steel structure fireproof coating manufacturers are small in scale, the production process automation level is not high, the research on raw materials dedicated to fireproof coatings is not enough, the detection and control of raw materials is not enough, and the detection methods in the production process are not enough. Incomplete, the construction equipment needs to be improved, and the compatibility with anti-rust paint can not be strictly tested; in terms of testing standards, “Fire-retardant coatings for steel structures” (GB14907-2002) only stipulates one coating thickness for the same kind of fire-resistant coatings However, in the actual project, the fire resistance limit required by the steel beam, steel column, and steel floor specifications is different. For example, the test report of the ultra-thin fireproof coating with an indoor thickness of 2mm is issued with a fire resistance limit of 1.5h. The actual project requires The fire resistance limits of steel beams, steel plates and steel columns are 1.5, 1.0 and 2.0h respectively. What thickness of fire retardant coatings should be used to protect steel plates and steel columns is currently inconclusive in theory or in practical projects. In addition, there are still some problems, such as the test methods, the differences between the standard components and the actual engineering components, the low quality of the construction team, the poor construction quality, the improper selection, the uneven product quality, and the lack of strict implementation standards of the testing agencies.