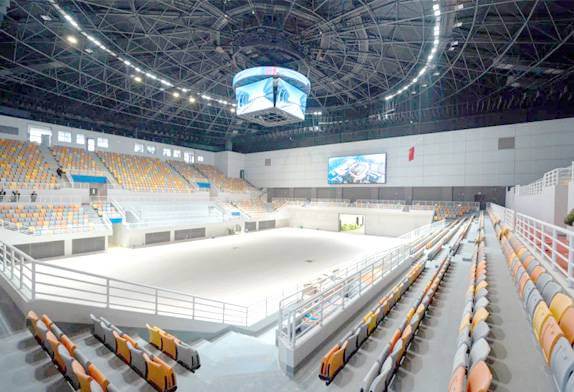 The third gymnasium is about 600 m long from east to west, 360 m wide from north to south, with a maximum building elevation of 45.000 m, and a steel roof with a maximum span of 164 m. The total land area is 227 900 ㎡, and the total construction area is 396 950 ㎡, of which the above-ground construction area is 197 553  and the underground construction area is 199,397 ㎡. The main structure of the sports swimming pool is divided into two parts: a reinforced concrete frame structure and a steel structure roof. Among them, the lower part of the steel structure roof support position is a rigid concrete column, and the upper roof is an oblique hyperbolic reticulated shell structure. The reticulated shell structure roof is divided into three parts: natatorium, gymnasium, and central hall according to the functions of the lower part.

The roof of the central connecting area can be divided into single-layer reticulated shells and two bucket-shaped structures. Both the north and the south of the cover are located on the finished support of the 8m platform. The roof supports on the east and west sides of the stadium and the swimming pool are located on the finished support of the L-shaped steel beam of the steel cantilever column; the central hall is located at 8 m from the north to the south. On the finished support of the platform, two funnel-shaped support columns are arranged in the middle. Hangzhou Olympic Sports Center Asian Games Third Gymnasium consists of 18,000 gymnasiums, 6,500 swimming pools, and supporting facilities. It will serve as the main venue for the 19th Asian Games in Hangzhou 2022.

Construction of the roof space frame of Ningwu county gymnasium