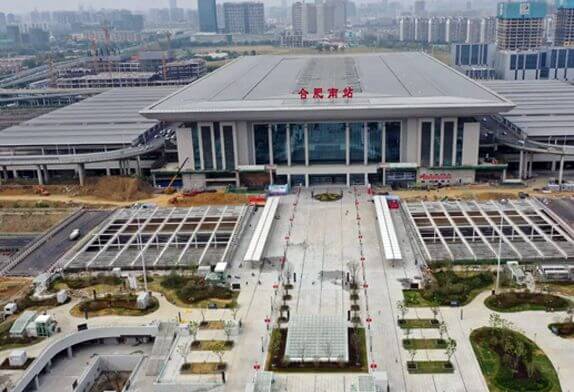 Hefei South Railway Station is a super large transportation hub integrating subway, bus, and commerce. The main station building has a complex structural system. The lower part is a concrete frame structure and the roof is a steel truss structure. The longitudinal length of the roof is 392m, which is greater than the limit of 300m and is a large-span and ultra-long space structure. According to the architectural design conditions, the main station building adopts the form of the frame structure, and the structural embedded position is the foundation floor. Part of the columns on the first underground floor is section steel-concrete columns, and some of the beams are section steel-concrete beams or prestressed reinforced concrete beams. The main beam on the first floor is made of bonded prestressed concrete beams, and the second beam of the well-shaped beam is made of unbonded prestressed concrete beams.

Second-story columns and roof: the elevation of the cornice is 37.0m, the plane size is 206×392m, the largest span column network is 43m×66m, the steel truss structure system is adopted, and the supporting roof columns are steeled concrete columns. There are no deformation joints in the roof part; three deformation joints are set in the north-south direction of the waiting layer and the bearing layer. The main station building cover is a steel truss structure.

The maximum vertical displacement of the roof under the constant + living standard value is 244mm, the maximum torsion-span ratio is 1/308, and the location is the southernmost cantilever end, which meets the requirements of the specification. The maximum tensile stress of the steel structural member under the heating load is 68.2MPa, and the maximum compressive stress is 88.5MPa. The temperature-induced stress of the member is very small, and the temperature-induced stress is shown in Figure 5. It can be seen from the figure that most of the temperature stresses are very low, which does not play a major role in controlling the amount of structural steel.

The steel structure of Gongga International Airport's T3 Terminal, has been successfully roofed