The steel structure of the project roof is composed of a single-layer reticulated shell (stadium, big tree square and other public areas), a double-layer curved space frame (gymnasium and swimming pool) and vertical support members, as shown in Figure 1. 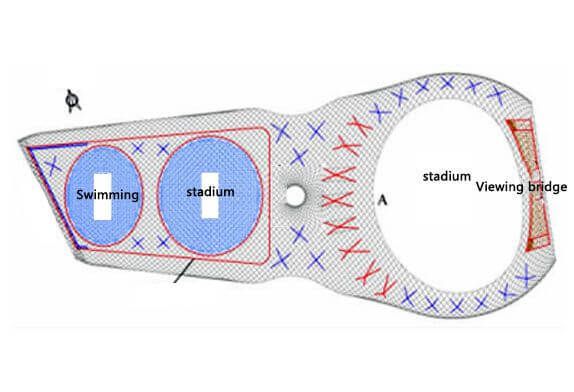 FIG.1 Top view of the steel structure roof of the sports center

The single-layer reticulated shell is a space-curved reticulated shell structure with a plane length of 532.7m and a width of 240.4m. The maximum height relative to the landing point is 42.3m (the landing point elevation +6.000m). The entire roof reticulated shell is directly “woven” into a quadrilateral space frame by box-section members. Except for the big tree square, the overall dimensions of the space frame members are uniformly 700 × 450 rectangular cross-sections, and the average side length of the space frame is about 4050mm. The opening range of the stadium is 191.2m long and 147.4m wide. The maximum cantilever span of the reticulated shell is 38.71m (the horizontal projection size from the first-level bifurcation point of the tree-shaped column), which is located on the west side of the stadium (Position A in Figure 1). The diameter of the center of the Dashu Square at the landing point is 20.6m, and the rhombus space frame is woven in the shape of a flower basket. The dimensions of the rectangular section members are 400 × 300 ~ 500 × 350, which are naturally connected to the roof space frame. The average side length of the space frame is 1550mm. Due to the complexity of the surface and the generation mechanism of the mesh, all rectangular box-section members have different degrees of spatial bending and twisting characteristics (Fig. 2). 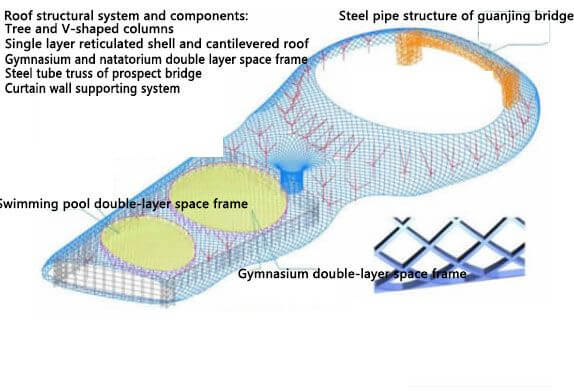 The roofs of the two pavilions are double-layer space frames, which are orthogonally inclined quadrangular pyramid space frames in the form of curved surfaces. The plane projections are all oval. The short axis of the gymnasium ellipse is 104.3m, the long axis is 116.9m, the short axis of the swimming pool is 77.6m, the long axis is 98.6m, and the height of the space frame is 4.5m and 3.5m respectively. The space frame is connected with the single-layer lattice shell through the upper chord ring beam. 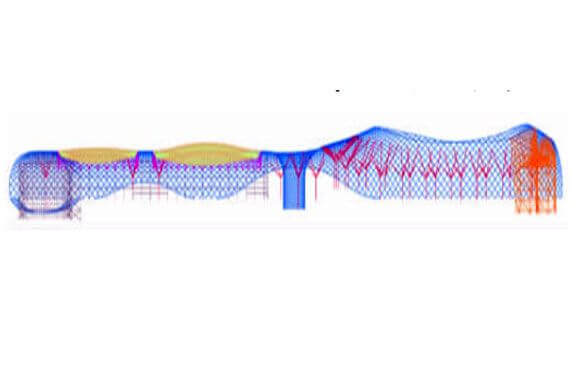 The vertical support system consists of four parts, which are: (1) 31 four-branched tree-shaped columns support the reticulated shell, of which 8 tree-shaped columns on the west side of the stadium are 1500 concrete-filled steel tubular columns. The branches are 900 steel pipes, the trunk of the tree-shaped columns in the remaining positions is 600 4 steel pipe columns, and the branches are 600 steel pipes. (2) The V-shaped columns supporting the space frame and the space frame shell (located under the upper chord beam of the space frame), of which 40 are distributed around the gymnasium and 30 are distributed around the swimming pool. (3) Pylon columns on both sides of the viewing bridge with a clear span of 100m. (4) Curtain wall columns on the west facade of the sunken square. The viewing bridge uses a truss structure (flat arch, corresponding to the upper chord reticulated shell), and the upper and lower chords are connected by V-shaped webs. The clear span of the bridge is 102.8-107.3m, the minimum height of the truss is 11.2m, and the maximum height of the lower chord from the ground is 30.4m. In addition to the above-mentioned support system, the single-layer reticulated shell has a total of 125 floors of supports in the surrounding area and in the Dashu Square, including 38 in the Dashu Square and 87 in the rest. The surrounding of the gymnasium and swimming pool are supported by annularly arranged hollow truss columns to form the envelope system of the glass curtain wall, as shown in Figures 1 and 2.

The above four vertical members and the landing points on the north and south sides of the reticulated shell together support the overall roof. 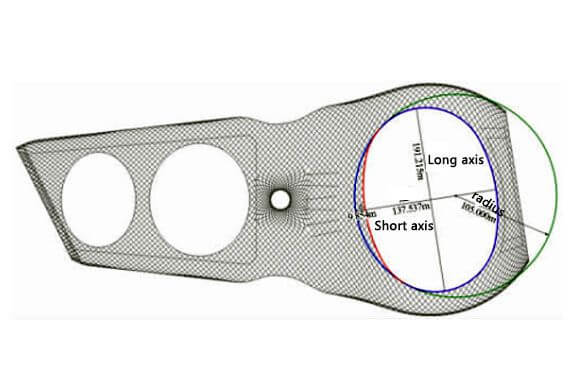 The gymnasium and the swimming pool are the two indoor venues of the sports center. Due to the needs of large-space building functions, if the roof structure adopts a single-layer reticulated shell like other areas, it cannot span the space of the two venues only by the surrounding vertical support system. It is not possible to set up tree-shaped columns in the stadium like other areas, so the gymnasium and swimming pool must adopt other more reasonable structural forms.

The scheme structure is an orthogonal half-open fish-belly truss structure, the upper chord is a rectangular steel pipe, the lower chord is H-shaped steel, and the web is a round steel pipe. Its typical features are two-way orthogonal; semi-empty; fish-bellied shape. The two-way orthogonality is to be consistent with the arrangement of the surrounding single-layer reticulated shells; the semi-empty web means that only 1 to 2 internodes near the end of the truss are provided with inclined webs, while in the middle internodes, only vertical webs are provided Rod, no oblique belly rod. The arrangement of the structural sloping web bars follows the distribution law of shear force, so as to achieve the purpose of effectively transmitting shear force; while the height of the fish-belly truss follows the change law of the bending moment, the section at the maximum bending moment is the highest, and the resistance to the bending moment is the highest. The ability is also the greatest. Orthogonally distributed trusses effectively solve the out-of-plane stability problem of plane trusses. From the perspective of force, although this structure is not a space structure, a combination of two plane structures, the overall force transmission of the structure is clear and simple, with high bearing efficiency and a beautiful architectural appearance.

In the fish-belly truss scheme designed for the two stadiums, the maximum height of the truss of the swimming pool is 8.66m, the maximum height of the truss of the gymnasium is 11.70m, and the distance between the trusses is about 12m (corresponding to the three basic space frame of the surrounding reticulated shell). Between the fish-belly trusses, corresponding to the component arrangement of the surrounding reticulated shells, a single-layer structure formed by “well”-shaped secondary beams is set on the upper and lower chord surfaces of the trusses, thereby forming a primary and secondary structure system with very clear stress. 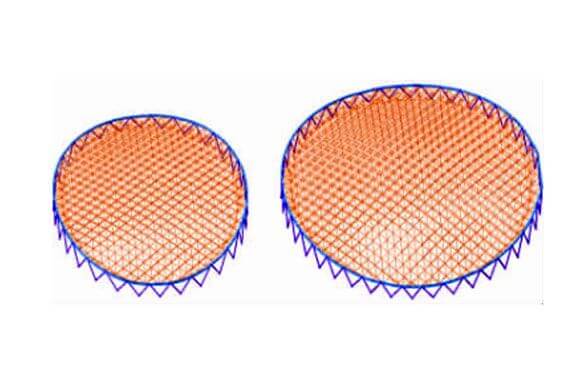 From the comparison in Table 1, the truss structure is obviously the least desirable solution, while the fish-belly structure is a more reasonable choice. However, the equipment major needs to arrange a large number of fans and supply and return air pipes within the height of the roof structure, and the fish-belly structure is closed into a line at the roof boundary of the venue, and there is no internal space to use. The equipment pipes are installed under the structure at this position, so that Completely destroys the overall effect of the fish belly structure. For the construction profession, other measures cannot make up for the damage caused by the equipment pipeline.

Due to the uncertainty of future use, the suspension requirements of stadium concerts and NBA games, etc., the roof structure of the gymnasium and swimming pool finally gave up the seemingly reasonable fish-belly structure plan, and chose the space frame structure as the implementation plan, leave more room for future use.