The middle span of the roof of the comprehensive transportation hub project is 26.1m, the cantilever on both sides is 13.1m, and the longitudinal column spacing is 26.1m. Firstly, the plane form of the transfer hall is selected according to the characteristics of span, load, and column distribution. The column layout and space requirements determine the form of point support. As the span of the two direction trusses is close, the force of the two direction trusses is relatively uniform. Under these conditions, Two square tetragonal cones can interact with the whole space and have good mechanical characteristics. Therefore, the project uses the lower chord point to support two orthogonal square pyramid space frame.

Then determine its profile form and draw its bending moment according to the support conditions of the space frame, as shown in FIG. 1. 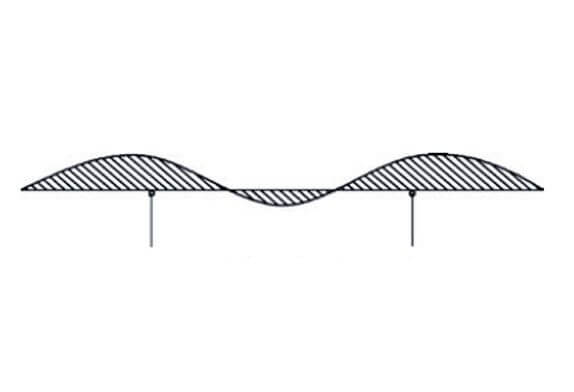 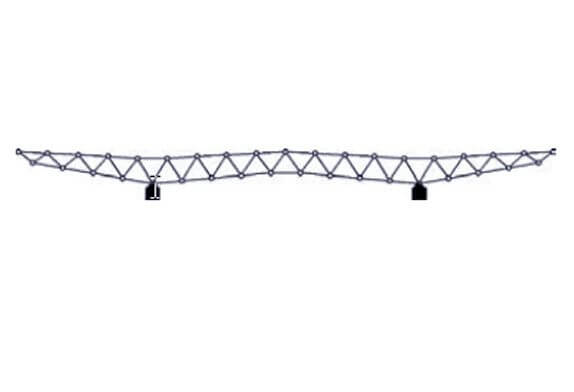 According to the selected model, it was found that the deflection at both ends did not meet the requirements of the 1/125L specification after the section as shown in Figure 2 was selected. Analysis of the reasons, although the section form and the size of the bending moment fit, the middle height of the structure is small, so the structure has a large deflection at both ends. Accordingly, the middle part of the structure is thickened, and the optimized section is shown in Figure 3.

The large-span cantilever steel space frame roof of the comprehensive transportation hub adopts the following analysis scheme. Firstly, a simplified bearing model is used to design the member. After the design is completed, an accurate and meaningful overall analysis is carried out. The calculation of the member with simplified support is carried out in professional design software (such as MST, SFCAD, etc.). In this case, the support stiffness can be input by the simplified method in Appendix K.04 of JGJ 8-2010 technical Specification for Spatial Grid Structures. The rubber bearings, columns, and beams all affect the bearing stiffness of the space frame. Therefore, the bearing stiffness is mainly composed of two parts :(1) the stiffness provided by the narrow sense bearings such as the rubber bearing of the space frame and the ball hinge bearing; (2) the stiffness provided by the substructure of the space frame, such as concrete column, steel-concrete column or the generalized support such as rack and steel frame. The rigidity of the narrow bearing can be obtained by the formula provided in the specification or the product parameters provided by the manufacturer. However, the stiffness of the lower generalized bearing is difficult to be obtained by a simple calculation. At this point, the finite element model of the structure can be established by using finite element software and obtained by applying unit force in the specific direction of the top of the column.

The design of a large-span cantilever steel space frame is different from that of an ordinary steel structure, but as long as we grasp its characteristics and solve the problems caused by its specificity, we can complete its design smoothly and with high quality. The following conclusions can be obtained from the summary.

How to install the purlin of a steel structure workshop?