The stadium is a six-story reinforced concrete frame structure with a three-story bleacher. The bleacher canopy is a long-span steel truss structure load-bearing structure system and an aluminum-magnesium-manganese standing seam metal plate cover. The stadium bleacher canopy is oval in the plane, and the roof is a quarter-circle arc, with a long axis of 263m and a short axis of 240m. There are floor-to-ceiling metal vaulted roofs on the east and west sides, covering the entire spectator seats on the east and west sides. The length is 300m, the maximum depth is 63.5m, the floor-to-ceiling arch height is 70m, the elevation of the highest point of the stand is 35.4m, and the height of the metal roof is 57m. The area of the bleacher canopy is about 20,000m. The audience can accommodate about 45,000 people. 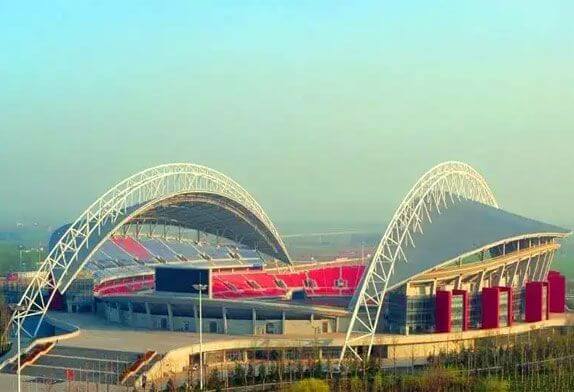 The structural system of the stadium bleacher canopy can be divided into vertical and horizontal structural systems. The longitudinal structural system is a single-bow curved arched tube truss. The truss span is L=300m, the sag height f=70m, and the sag-span ratio is f/L=1/42.8, which is larger than the general truss vector span and has better stiffness.  The cross-section of the truss is an equilateral triangle composed of three steel pipe chords. The plane projection of the axis of the single arch steel pipe is a curve. Compared with the parallel arch, its architectural shape is more beautiful. The horizontal structural system consists of 18 cantilevered rigid frames and 7 longitudinal ring beams with spans ranging from 27 to 63.5m. The spacing between the rigid frames varies from 8 to 10.5m. Both the steel frame beam and the steel frame column are single steel pipes, and diagonal bracing is set in the beam and column plane. The upper point of the diagonal bracing is about 5m away from the beam-column node, and the lower point is at the column foot. The longitudinal ring beam is a single steel pipe, which is just connected to the rigid frame beam and can be used as out-of-plane support for the steel frame beam to ensure the lateral stability of the rigid frame and the overall stability of the rigid frame. Two steel tie rods and a diagonal brace are arranged in the plane of each rigid frame and the arched truss, and the nodes on the tie rods are in the truss. At 4-6m from the cantilever end, the pull-up point of the diagonal bracing is located near the upper chord node of the inner truss of the rigid frame, and the pull-down point is about 15m at the front cantilever end of the rigid frame. Connection nodes are considered rigid connections. All members are straight seam welded pipes, and nodes are welded on intersecting surfaces. The structure consists of arched trusses, tie-rod cantilever rigid frames, and ring beams connected by steel tie rods and diagonal bracing to form a complete self-balancing system, and the interaction of the two structural systems makes the two have a harmonious relationship of deformation, the structural deformation is better controlled, which not only greatly reduces the vertical deflection of the rigid frame, but also effectively improves the stable bearing capacity of the structure. At the same time, the simple and orderly geometric configuration also achieves the architectural aesthetic effect. The lateral structural system of the stadium stand canopy is similar to the plane stress system. The components composed of arch trusses, rigid frames, longitudinal ring beams, and tie rods have greater stiffness in the longitudinal and lateral directions. The structure has the characteristics of light structure and a few types of steel components. The specific structure plan and section layout are shown in Figure 2 (a and b) 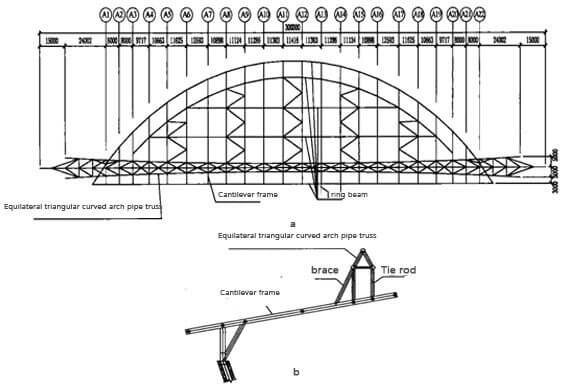 The structural arrangement is limited by architecture and art. Considering various factors, the structure should be arranged as reasonably as possible. The stadium canopy adopts the technology of a steel arch bridge, which has the following advantages:

4、A large column-free space is created, and the architectural effect is realized. The overall structure is not only smooth and beautiful but also achieves good economic effects.